It was an ordinary Tuesday morning. I had just dropped off all three girls to my mom, no Adi in the car to keep me company before dropping her off at preschool. I was listening to Trevor Noah recount his early years as he narrated his book, Born a Crime: Stories from a South African Childhood. I hardly noticed the red light I was stopped at, just part of the autopilot routine of getting to work. I was stopped right next to an entrance to a gas station, getting lost in a story, when I noticed a problem.

A car exiting the gas station was getting ready to pull out, probably hoping I’d let him cut in front of me, with a brown Dunkin Donuts bag sitting right there on the roof of the car. That’s so sad, I thought to myself. That poor person is going to lose their breakfast.

I could help, I thought. But how?

I could beep. But how would he know I was beeping at him? I could roll down my window, but I didn’t think that would catch the drivers attention. What if I waved my arms, maybe then I’d catch his eye.

I went with the arm waving, totally out of character to be drawing attention to myself. I leaned towards the passenger side window and waved my right arm up and down frantically.

It worked. The driver saw me and looked at my quizzically. I smiled…awkwardly I’m sure.

What now? I hadn’t thought beyond getting his attention.

It all clicked. The man realized what the crazy girl in the minivan was trying to communicate. He raised a hand in thanks and opened his car door to retrieve the bag.

I took off for the highway, feeling extremely proud that I had saved breakfast. 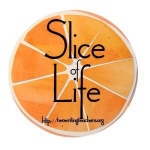 I'm a mom of three daughters and a literacy coach in CT. I love to learn and share with others. View all posts by Jessica Carey

13 thoughts on “Living a writerly life just might save breakfast…”